The map below shows the proposed cycle network for Wokingham Borough and how it connects with cycling routes in neighbouring local authorities. It's based on our analysis of where people are most likely to cycle and we've divided it into three networks: primary, secondary and tertiary.

The primary network consists of the most popular routes, which typically connect towns and villages to other town centres or places where many people work and study. On these routes, we aim to keep cyclists separate from both vehicle traffic and pedestrians wherever space allows.

The secondary network is made up of routes which support these, also based on popularity and put forward by local people during consultation. We'll look at these in more detail in future versions of the LCWIP.

The tertiary network is usually along quieter, residential streets which contribute towards a joined-up cycle network across the borough.

If you have any comments on this network you can leave them at the bottom of this page. 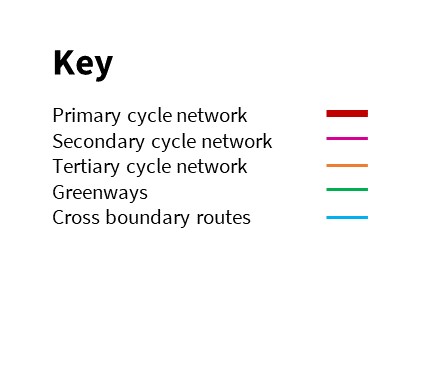 What is your email address?

Make sure your voice is heardAdd your email address

9% of comments on Commonplace are never published.
We verify that all responses are genuine before publishing.
We’ll send you an email to confirm your response.
Your email address will never be shared publicly.